It’s going to be hard to fall asleep tonight. Feeling journey proud, as my mama would say. Thinking of all of you who have been there for me, especially during this past year. Each of you have helped, in your own way to give me the courage to make this journey possible. I will carry your smiles, hugs and words along for the ride. Stay tuned as we travel together. 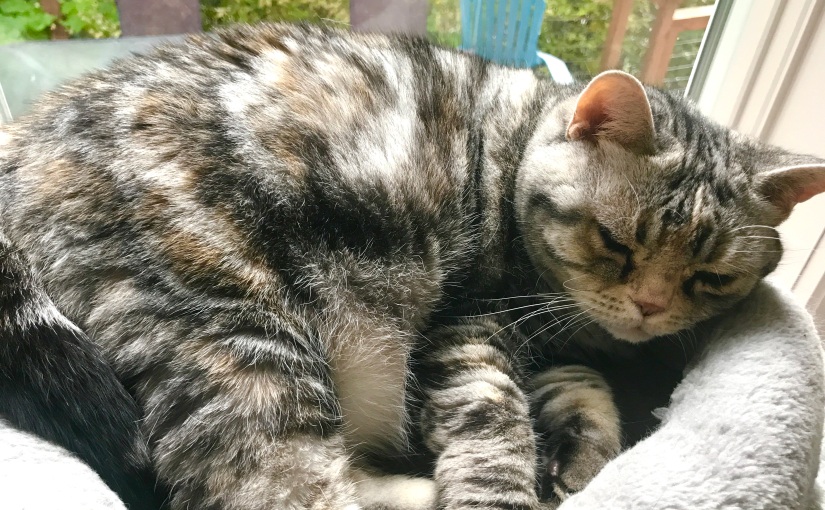 This past week I have been cat sitting. It’s been a nice reprieve, relaxing and very quiet. My cat sit is just a few minutes from town, with a creek running just feet from the back door. I brought all the foods I eat lately: banana, peanut butter, bread, butter, rice, baked potato (I bought a little steak, steamed the hell out of some broccoli, that went down pretty well) and crackers so I was set. Oh and ginger tea. The only thing I had to do was drive to my radiation at 2:00 each day.
Next week I’ll be at a cat sit near downtown just feet from the Clark Fork river. The week after that, back at home and my second week of the chemo pack strapped to me 24/7. Now that I know what it’s like I am so not looking forward to it. But hey I can do it! My radiation doctor laughed when I half jokingly, asked if we could check to see if the cancer was gone so maybe I don’t need another round of chemo.

I needed this week in a house by myself with such a peaceful setting and sweet kitties. Last weekend, I wrote about the birthday celebration but left out the out unfolding stress of that weekend. Living downtown sometimes brings it’s challenges, parking being one of them. Last Saturday as I drank coffee I suddenly remembered I had not moved my car from the street where the farmer’s market happens. Of course, it was gone when I went outside, in its place was a lovely family selling produce. A phone call to the towing company brought some relief as they told me my car had only been moved a few blocks. “just walk around and you will find it.” After walking two blocks east and two blocks south, I needed a rest before walking more in hopes of finding my car. I called back to ask if they keep track of where they move cars to. That would be too easy. No they don’t.
It wasn’t until Sunday that I walked around some more with no sign of car. Now I was stressing. My appointment with the chemo doctor was first thing Monday morning. It took several more phone calls for me to find out my car was at the Red’s towing lot. They are closed on Sundays but the answer service found out there was someone there. One of my favorite housemates drove me over there. We immediately began our improv act. I was his sick mother and by God my “son” was going to make things right. The young man behind the counter asked for $350 to release my car. “T’ put his arm around me, “we can’t afford that, she has medical bills”
I piped in, “I called several times yesterday and was told it was only moved a few block, now you are asking for the daily rate.” Red’s employee asked for proof, so I showed the call history on my phone. After telling him I had an appointment with the chemo doctor first thing, he asked for proof. I pulled up Mychart on the phone to show proof of the appointment. T, sticks up for me, again, “she does not need this stress right now.” Employee did start to feel bad, trying to get hold of his boss. Finally the employee assured us he would call once he heard from the boss. There was never a phone call.
Monday morning, I picked up my car just minutes before my appointment. They charged me $275, the towing fee, removing the daily rate. Unhappy, I frowned and left with my car.
I’ve since learned a few things about Red’s and towing companies. During Covid, Red’s would not allow people in to pick up their car if they were wearing a mask! Also, towing companies have free reign to tow a car from anywhere that has signs that parking is not allowed or not allowed at certain times. It seems it should be illegal to tow on a Saturday and not be able to pick up one’s car until Monday. They should have someone at the shop on Saturday’s and Sundays. It’s a scam. There could be numerous situations that would make life miserable, what if you were flying out that day or had an emergency? At least folks need to be aware of this scam and the way Red’s treats their customers. If I have the energy and can figure out who in the government to talk to, I will.

Today, I’m not going anywhere, staying put with the kitties, reading and listening to the creek (no radiation on the weekends). The kitties’s owner is a retired English teacher, books adorn several shelves. She offered for me to read any books while here. I’ve started two, enjoying both very much, The Marriage Portrait, a novel by Maggie O’Farrell, author of Hamnet and Never Simple, a memoir by Liz Scheier.

Enjoy your weekend and thanks for reading.